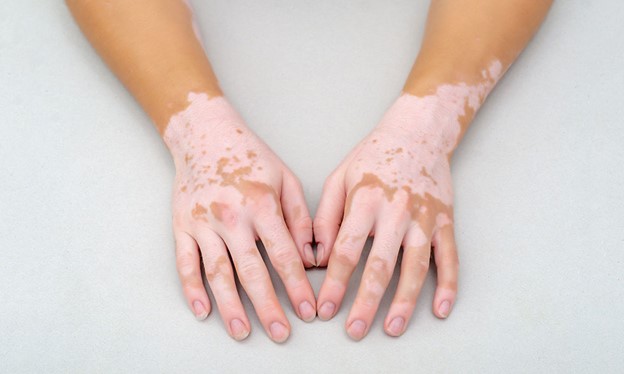 Vitiligo and the Social Stigma Attached to It

A common skin pigmentation disorder, vitiligo causes the skin to lose its color or pigment called melanin. The skin cells that are responsible for delivering the pigment melanocytes progressively are destroyed or lose their function in vitiligo. However, the specific reason for vitiligo is as yet not surely known. Both segmental and non-segmental vitiligo have various proposed hypotheses to explain the sudden loss of epidermal skin melanocytes.

According to most of the experts, a combination of effectors: genetic, immune and trigger, are responsible for this disorder. Studies suggest that genetic factors play an essential role in the development of vitiligo with around 20% of vitiligo patients reporting the disorder in relatives. Numerous genes are likely to be involved in various combinations acquired by different people. This perhaps is responsible partly for the distinct variabilities found in vitiligo sufferers. The increased risk of developing vitiligo has been found to be associated with variations in over 30 genes occurring in various combinations. A well-established theory states that vitiligo is usually initiated by a trigger. These can include the possible involvement of viruses, hormonal changes such as pregnancy, psychological trauma and stress, exposure to some industrial chemicals and trauma to the skin. Trauma to the skin is considered to be a common trigger. Body locations subject to repeated trauma to the skin such as continuous pressure from wearing hats or friction and injury from clothing.

In non-segmental vitiligo, the incidence of this phenomenon, called Koebner’s phenomenon has been reported in between 15 and 70% of patients. The theory for the progressive loss of melanocytes which is widely accepted in non-segmented vitiligo is the auto-immune theory. The autoimmune theory proposes that the immune system results in the destruction of melanocytes by reacting against the body’s own tissue and cells. Segmental vitiligo, which accounts for between 5 and 10% of cases is a less common type of vitiligo. This type of vitiligo is less commonly associated with auto immunity as described in the previous case. Neural theory for segmental vitiligo is the most common of all. It proposes that certain chemicals are released from the nerve endings which cause destruction of the melanocytes due to its toxicity and lead to the reduction (or complete absence) of the skin melanin production. In segmental vitiligo the vitiliginous lesions do not cross the mid-line of the body and generally follow a pattern. They are distributed in the body in such a way that corresponds to the nerves underlying the skin.

A protective mechanism is possessed by melanocytes to eliminate free radicals and melanin precursors that are toxic. As suggested by experts, both kinds of vitiligo may involve a biochemical imbalance of this mechanism which further leads to an accumulation of free radicals and toxic chemicals which are responsible for damaging melanocytes. The exact cause of vitiligo is still unknown; however, a substantial research is being undertaken to determine its cause and spread. Globally, researchers are investigating various concepts including genetic defects in melanocytes, involvement of proteins, role of free radicals such as nitric oxide and the role of melanocortins and alpha-MSH in vitiligo.

Is Vitiligo Just a Dermatological Disorder?

Compared to the general population, researchers have found a high level of distress in people with vitiligo. Prompt acknowledgment of a person's distinction from the standard is through their appearance. Not exclusively would appearance be able to demonstrate a basic distinction, yet it tends to be viewed as a deviance in itself. As such vitiligo is not really an illness of medical significance but there is all the more of a social stigma associated to it because of cosmetic reasons. It, however, brings huge mental pressure to the patient who is more humiliated than the casualty of any agony or distress from the disorder. These patches steadily grow in size and cause a lot of psychological stress to the patient. With its actual cause widely not known, the individual itself is sometimes blamed and shamed for their lesions. Hence vitiligo is not only the lack of skin pigmentation, but also in many ways affects the entire identity of an individual.

People suffering from this disease have to cope up with more than just the skin color. Concealing lesions for avoiding the possibility of stigmatization is a common response. This preoccupation with concealment also leads to extreme anxiety in patients. In some cases, social isolation leads to a feeling of loneliness, change in processing of social information, negative impact on health and sometimes even criminality.

There is a strong need for supporting these individuals. A portion of the NGOs are working globally for this cause. They give a common platform to such individuals to exchange views, to discuss their issues, to learn scientific facts about their disease or more all to improve the mental self-image of the individual. Therefore, a more realistic approach of reducing the social isolation in these people is to support them in using and exploring effective coping strategies.