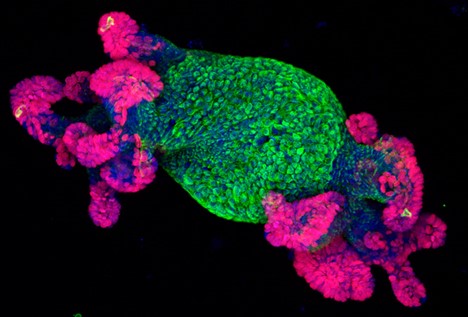 The Revolution of Human Organoids in Cell Biology

To study diseases, human development and drug therapies, investigators have traditionally used either animal models or 2-dimensional cell cultures, both of which have limitations. Organoids are a new research tool derived from human pluripotent or adult stem cells or somatic cells in vitro to form small, self-organizing 3-dimensional structures that simulate many of the functions of native organs. Intestinal, renal, hepatic, endometrial and other organoids have been created from adult stem or progenitor cells whereas, cortical brain organoids among others have been created from pluripotent stem cells. Successful organoid formation requires the careful orchestration of spatiotemporal cues from growth factors and supportive matrices to simulate the niches particular to each organ type. The advantages of the resulting organoids are several. For instance, as compared to 2-D cell cultures, the 3-D nature of organoids can more closely mimic natural physiological processes, including cell-cell interactions, stem-cell differentiation and cellular movement. In addition, most organoids can undergo extensive expansion in culture while maintaining their genomic stability, making long term storage and high-throughput screening possible.

As compared with animal models, organoids reduce experimental complexity, are amenable to live imaging techniques and can in some instances provide a more accurate model of human development and disease. For example, renal organoids have been used to demonstrate how high throughput screening of chemicals can reveal new pathways involved in cyst formation in polycystic kidney disease. Researchers have also created organoids from various primary tumor types which can be used to study the tumor niche and have the potential for use in anticancer drug screening. Organoids combined with other technologies such as testing drug toxicity through organ on a chip system or testing gene and cell therapies by transplanting organoids are two further applications in development.

Various biological phenomena that are human-specific are not agreeable to being reproduced in animal models. The human brain, for instance, is undeniably more intricate than its mouse partner, owing partly to human-specific mechanisms and developmental events. Another example is the neurons in the human cortex. They emerge from a cell type, outer radial glia, that is absent or is available just in minute numbers in rodents. The metabolization of common drugs like ibuprofen and warfarin in the liver is also different in humans and rodents. In humans, the drug warfarin is prescribed as an anticoagulant and ibuprofen is prescribed for fever, pain and inflammation, whereas both these drugs are toxic to rats. Understanding the genetic diversity of humans and its impact on the onset and progression of diseases and drug response is essential for the development of personalized clinical treatments and requires the foundation of human-specific model systems.

Organoids currently are being employed in the biomedical research to:
• Test the sensitivity and toxicity of drugs.
• Examine tissue morphogenesis and organ development.
• Model various diseases.
• Potentially form complex tissues for transplantation.

The organoids are being used across a variety of research disciplines and applications with extensively published studies and data.
• Regenerative Medicine: Current advances in the development of intestinal organoids provide the possibility to organoid-based restorative treatments for patients with human inflammatory bowel disease and short bowel syndrome. Successful grafting of human colonic stem cells to mouse colons have already been carried out, which provides evidence that intestinal epithelial organoid cells may be successfully used in transplantation-based therapies.
• Personalized Medicine: Most suitable treatments specific to the patients are promised by personalized medicines. Being derived from a single patient biopsy, organoid systems act as important tools in developing personalized medicines as the culture will display genetic similarity. Instead of lengthy trial and error testing of treatments prescribed to the patient, drug-efficacy tests can therefore be performed on these organoid models. The procedure has already proven effective in recognizing individual treatment outcomes for patients with cystic fibrosis.
• Cancer Research: The lack of in vitro models that can accurately replicate the physiology of original tumor has limited cancer research since long. Organoid frameworks that maintain the gene expression and histology of the original tumor can be utilized in the prediction of drug susceptibility and patient’s response to cancer treatments in the future.

Despite these advances, many challenges to the use of organoid in research remain, including
• Limited standardization of growth methods
• Limitations in the physiological accuracy of the tissue architecture
• Lack of vascular and neural inputs in resulting organoids
• Absence of increased interstitial pressure characteristics of tumors in vivo

Researchers are seeking to overcome such challenges. With time, standardized protocols should be feasible, and more accurate simulation of human physiology with organoid technologies may become a reality.