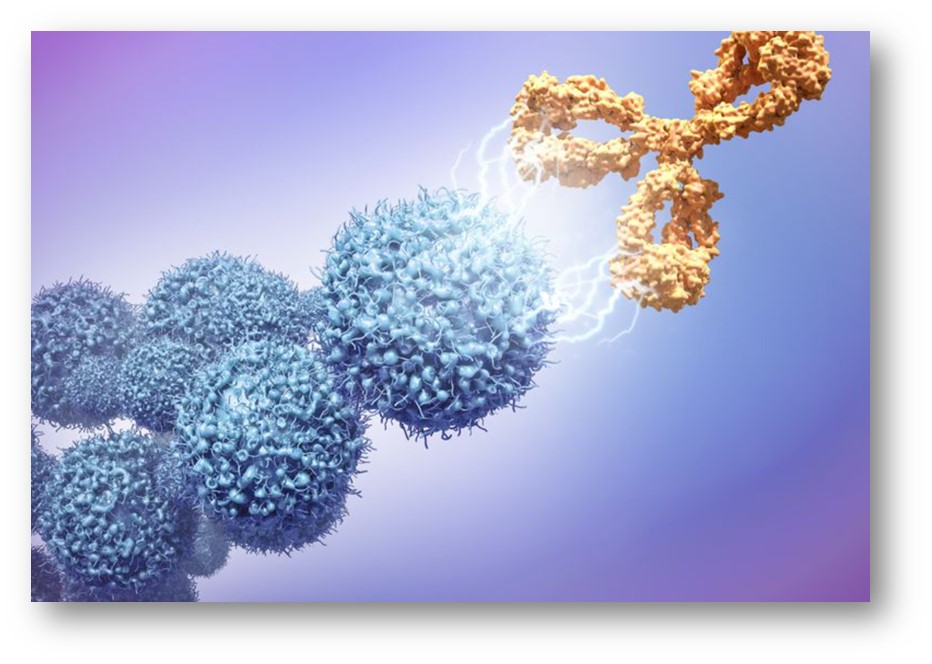 Cancer immunotherapeutic technologies such as cancer vaccines, checkpoint inhibitors and antibody-drug conjugates induce the immune system to either elicit a therapeutic response or to deliver potent anti-cancer drugs with greater specificity. Over the past couple of decades, monoclonal antibody-based treatment has become one of the most successful therapeutic strategies in cancer. Monoclonal antibody therapy is a new type of targeted immunotherapy that induces the body’s immune system to specifically attack cancer cells. Among the other available cancer therapeutics, the future of monoclonal antibodies (MAbs) seems promising. At present, some monoclonal antibodies have increased the efficacy of the treatment of certain tumors with acceptable safety profiles.

What Are Monoclonal Antibodies?

These types of antibodies are conjugated with a radioactive substance, a chemotherapeutic drug, or toxin that kills cancer cells recognized by the antibody. Target-specificity and limited side effects make these antibodies highly potent anti-cancer agents. Antibody-drug conjugates are antibodies that have chemotherapy drugs attached to them, target the surface of cancer cells and deliver the toxic substance to that specific area. Examples include Brentuximab Vedotin which targets CD30 antigen in Hodgkin Lymphoma and the drug attached to it is monomethyl auristatin E (MMAE). In Non-Hodgkin lymphoma, monoclonal antibodies combined with some radioactive molecules target CD20 antigens on B cells and directly delivers radioactivity to cancerous B-cells. This type of immunotherapy is known as radioimmunotherapy.

How Does Monoclonal Antibody Therapy Work?

The Connection Between Cancer and Monoclonal Antibody Therapy

Monoclonal antibodies are administered intravenously. Sometimes monoclonal antibody drugs are used in combination with chemotherapy or hormone therapy. Since monoclonal antibodies themselves are proteins, after administration, they can cause allergic reactions to the drug. Few common side effects are fever, chills, weakness, fatigue, muscle ache, headache, skin rashes, diarrhea etc. Sometimes it can be severe which can lead to death also.

Monoclonal antibody therapy and immune checkpoint inhibitor therapy have revolutionized the traditional cancer treatment. Monoclonal antibody and gene transfer technologies have enhanced our fundamental knowledge on antigen recognition, T cell activation as well as T cell co-stimulation, thus leading to the invention and also the success of checkpoint blockade and CAR-T cell therapy. Despite the clinical success of this therapy, therapeutic resistance remains a major challenge. However, as tumor cells mutate, they develop new antigens and checkpoint targets and the current system of rapid cancer genome sequencing can be employed to identify these novel targets for this immunotherapy.

The relatively recent appreciation of the effectiveness of monoclonal antibody therapy has led to a major consideration of new therapeutic combinations that employ standard chemotherapy together with immunotherapy to provide a combined approach that may enhance therapeutic responsiveness while reducing adverse side effects. The multifaceted mechanism of action and target specificity distinguishes monoclonal antibody therapy from other treatments and highlights the capability of antibodies to elicit strong antitumor responses while minimizing toxicity and adverse events. Progression of the therapy involving monoclonal antibodies will continue. They have the potential to offer curative therapy for many cancer patients. Though nanobodies, mini bodies and other antibody forms have been developed for this purpose, until now, monoclonal antibody has made a remarkable transformation from a scientific tool to a valuable drug for human therapeutics.