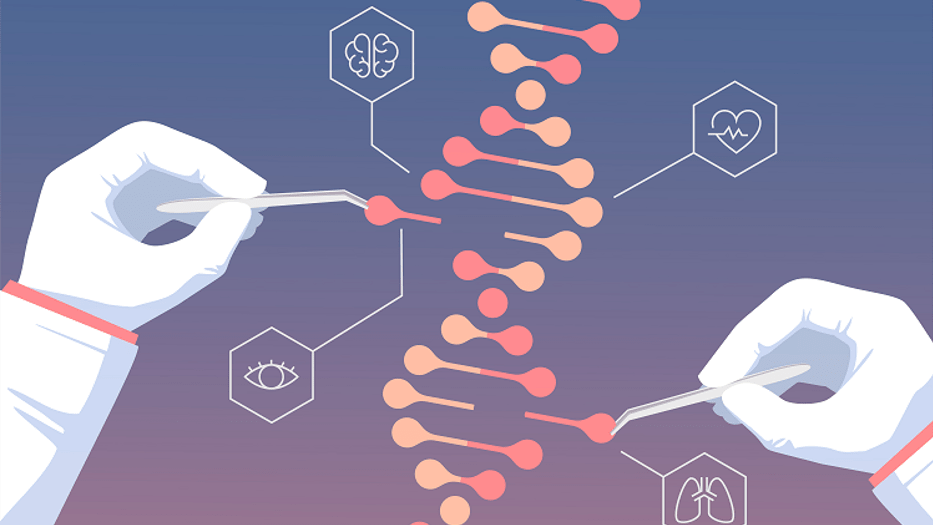 CRISPR (pronounced “crisper”) as a genome-editing tool is currently one of the hottest topics of research in the biological sciences. This is very much evident in the fact that in 2011, there were fewer than 100 published papers on CRISPR; but in 2019, there were more than 30,000 and counting, including various applications, refinements to CRISPR, new techniques for manipulating genes, improvements in precision, and more. So, let us today take a look at Science’s choice for Breakthrough of the year 2015.

The discovery of clustered DNA repeats occurred independently in three parts of the world. The first description came from Osaka University researcher Yoshizumi Ishino and his colleagues while studying Escherichia coli in 1987. In 1993, researchers of Mycobacterium tuberculosis in the Netherlands published two articles about a cluster of interrupted direct repeats (DR) in that bacterium. They recognized the diversity of the sequences that intervened the direct repeats among different strains of M. tuberculosis. At the same time, repeats were observed in the archaeal organisms of Haloferax and Haloarcula species, and their function was studied by Francisco Mojica at the University of Alicante in Spain. By 2000, Mojica performed a survey of scientific literature and one of his students performed a search in published genomes with a program devised by himself. They identified interrupted repeats in 20 species of microbes as belonging to the same family. In 2001, Mojica and Ruud Jansen, who were searching for additional interrupted repeats, proposed the acronym CRISPR (Clustered Regularly Interspaced Short Palindromic Repeats) to alleviate the confusion stemming from the numerous acronyms used to describe the sequences in the scientific literature. In 2002, Tang et al. showed evidence that CRISPR repeat regions from the genome of Archaeoglobus fulgidus were transcribed into long RNA molecules that were subsequently processed into unit-length small RNAs, plus some longer forms of 2, 3, or more spacer-repeat units. A major addition to the understanding of CRISPR came with Jansen's observation that the prokaryote repeat cluster was accompanied by a set of homologous genes that make up CRISPR-associated systems or cas genes. Researchers have also discovered that there are numerous CRISPRs. When people talk about CRISPR, they are usually referring to the CRISPR/Cas9 system. In recent years, researchers have found other types of CRISPR proteins that also work as gene editors.

Function in the Wild

The function of these CRISPR sequences was mostly a mystery until 2007, when food scientists studying the bacteria Streptococcus thermophilus used to make yogurt showed that these odd clusters actually served a vital function: They’re part of the bacteria’s acquired immune system.

It works like this: The bacteria are under constant assault from viruses; so, they produce enzymes to fight off viral infections. Whenever a bacterium’s enzymes manage to kill off an invading virus, other little enzymes will come along, scoop up the remains of the virus’s genetic code and cut it into tiny bits. The enzymes then store those fragments in CRISPR spaces in the bacterium’s own genome. The CRISPR spaces act as a “most wanted” gallery for viruses, and bacteria use the genetic information stored in these spaces to fend off future attacks. When a new viral infection occurs, the bacteria produce special attack enzymes, known as Cas9, that carry around those stored bits of viral genetic code like a mug shot. When these Cas9 enzymes come across a virus, they see if the virus’s RNA matches what is in the mug shot. If there is a match, the Cas9 enzyme starts chopping up the virus’s DNA to neutralize the threat.

CRISPR in the Lab

For a while, CRISPR was not of much interest to anyone except microbiologists, who marvelled at the sophistication of the system in the humble bacteria. But soon enough, scientists discovered that they could fool the Cas9 protein by feeding it artificial RNA, i.e., a fake mug shot. Now, the enzyme would search for anything with that same code, not just viruses, and start chopping. In a landmark 2012 paper, Jennifer Doudna of the University of California Berkeley, Emmanuelle Charpentier of Umeå University in Sweden , and Martin Jinek showed they could use this CRISPR/Cas9 system to cut up any genome at any place they wanted. The unbelievable implications opened the floodgates of research in this field. Further advances followed when Feng Zhang, a scientist at the Broad Institute in Boston, co-authored a paper in Science in February 2013 showing that CRISPR/Cas9 could be used to edit the genomes of cultured mouse cells or human cells. In the same issue of Science, Harvard’s George Church and his team showed how a different CRISPR technique could be used to edit human cells.

VIII. Successful targeting of cancer – It targeted the “command center” of cancer – called the hybrid fusion – which leads to abnormal tumor growths. It also helped to slow the spread.

IX. Creating plants more resistant to disease and other stresses

X. Editing countless genes at once

Despite all the promise, CRISPR is not a perfect tool, at least not yet. Scientists have recently learned that the approach to gene editing can inadvertently wipe out and rearrange large swaths of DNA in ways that may imperil human health. That follows recent studies showing that CRISPR-edited cells can inadvertently trigger cancer. That’s why many scientists argue that experiments in humans are premature: The risks and uncertainties around CRISPR modification are extremely high. However, this has only made scientists more determined to improve this invaluable tool. One way of doing that is through editing RNA instead of DNA. Another technique, discovered recently, is prime editing. It does not rely on the ability of a cell to divide to help make the desired changes in DNA. Also, it does not cut both strands of the DNA double helix, minimizing the chances of making unintended changes that could be dangerous.

However, there is something else that makes CRISPR controversial – its potential for human germline modification. This aspect raises several questions with respect to the ethics of human enhancement and that of heritable genetic modification. The waters have been muddled further by the shocking news declared in November 2018 about the world’s first CRISPR-edited babies by a Chinese scientist. The work was widely condemned as unethical, dangerous, and premature, and an international group of scientists called for a global moratorium on genetically editing human embryos.

Even amidst the legal battles regarding the ownership of CRISPR, one thing is clear from the current speed of progress in CRISPR research – despite the misgivings, CRISPR will continue to impact our world more and more in the upcoming days. It is presently thought to have the potential to help big issues like climate change (with genetically engineered phytoplanktons), energy crisis (with more sustainable biofuels), eradication of vectors and rodents (through gene drive), food security (with more nutritious crops), antibiotic resistance, genetic diseases, other diseases like AIDS, diagnostics (yes, it may be used to scale up coronavirus testing!), and even bringing back extinct organisms! Other prospects exist with respect to freedom from allergies, pet breeding, more nutritious fish, faster racehorses, and much more. For biologists in general, the most exciting prospect, however, probably is exploring how genomes work, that can in turn open up unending avenues for critical discoveries.

Although dreaming in the lines of Gattaca right now would be a stretch to say the least, with the ongoing improvements in the field (e.g., the recent proof of safety of CRISPR’d cells in humans, the invention of Cas-CLOVER – a cleaner, more precise alternative of CRISPR/Cas, and better targeting using light-controlled guide RNA), it would not be an exaggeration to say humanity is standing at a crossroads in the history of time.

Share this Article
The link has been copied!
Newer Article

The Promise of Long Non-Coding RNA Parkinson’s Disease – The Pandemic in the Making?